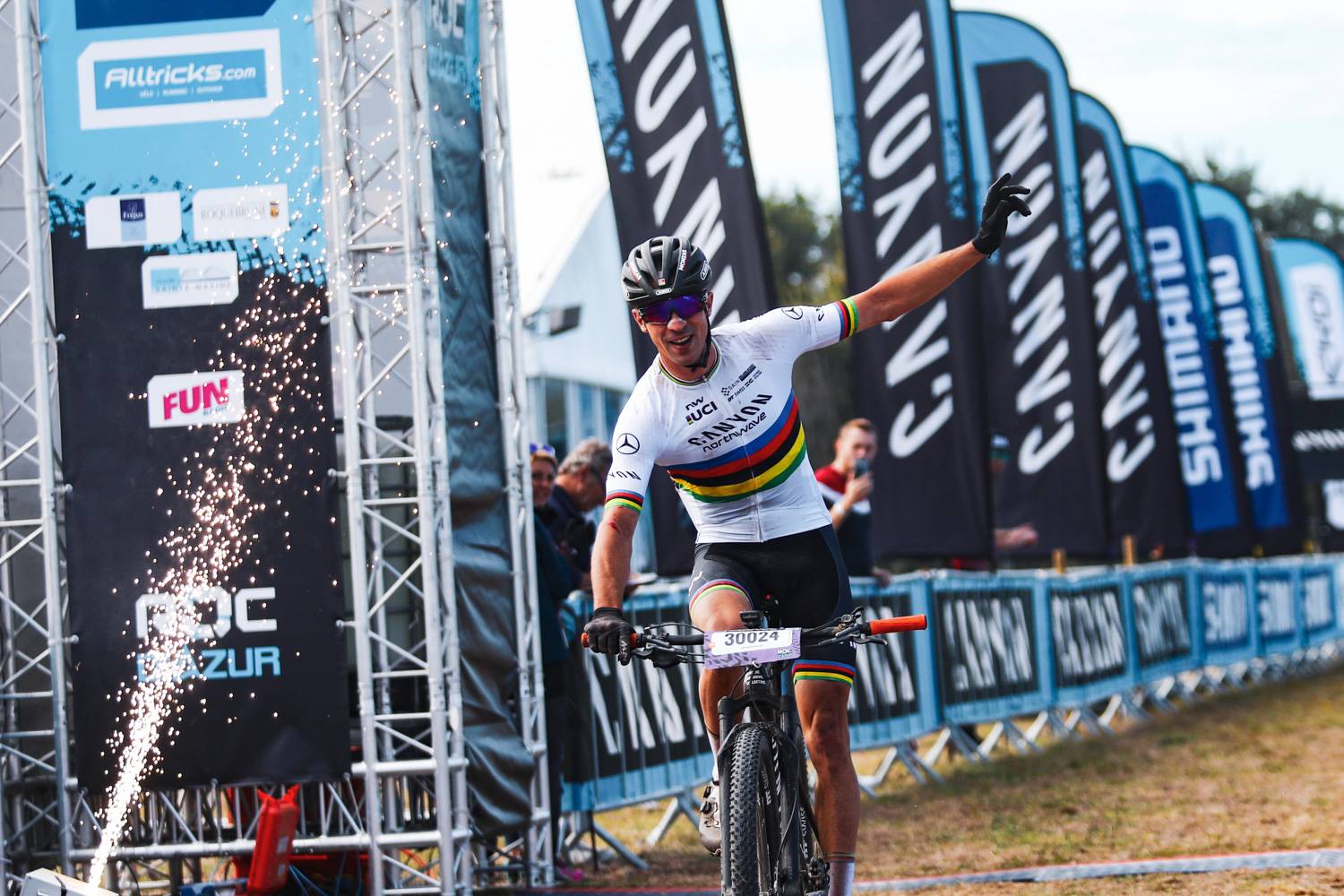 Fun activities and families hogged all the attention in the Roc d’Azur on the eve of Sunday’s elite race, in which Jordan Sarrou will be gunning for a fourth win in Fréjus. From recreational rides for cyclists of all levels and genres to races for children as young as 3, the Nature Base in Fréjus (Var) once again went wild with the passionate fans who flocked there to push the pedals or visit the Show.Key points:• Kids, families and astonishing disguises —the Roc d’Azur was in party mode on Saturday. • Steve Chainel claims the Gravel Roc for the third time. • Loana Lecomte wins the Roc Tandem with her pilot Rémy Duquesne in her tandem debut. • On Sunday, the Roc d’Azur will keep fans on the edge of their seats as Jordan Sarrou comes out swinging in his quest to take a record fourth victory.Pole vaulter Renaud Lavillenie will be starting the race for the first time with a far more modest goal: having a great time. A super-sized snake with cavemen and cavewomen in it —welcome to the Roc d’Azur! Once again, participants in the Rando Roc déguisée kept the tradition going. Apart from thrilling races, the Roc d’Azur is also about entertaining moments in which timers and stopwatches are reduced to mere baubles and trinkets. The goal was exactly the same for the Shimano Rando Roc Électrique noire (45.4 km), the Alltricks.com Rando Roc noire (45.4 km) and the Rando Roc famille (8 km): having a blast in the heart of Les Maures Massif. The atmosphere was identical in the Kid Roc (a series of races of varying lengths depending on the age of the children), which wrapped up the day on Saturday. While the kids felt the enthusiasm and passion for mountain biking light up inside them, their parents also put on a real show, going wild with each of their scions’ moves. Although recreational rides, children and families were the protagonists of the Saturday programme, there were also several competitive races. Gravel grinding, a booming genre halfway between mountain biking and road racing that has been part of the Roc d’Azur since 2016, drew a large field to the Gravel Roc (65.4 km). Steve Chainel, who came up short in the previous edition after prevailing in 2017 and 2018, wrested his crown back from Cédrick Dubois, who came in second. “I remained cautious and patient throughout the race”, explains the French cyclo-cross champion. “45 kilometres into the race, I broke away on a very treacherous descent and then kept going at the bottom. Everything fell into place. The course was relatively fast, but there were also rugged and tricky sections. It was a really nice gravel grinder. I enjoy this sport a lot. I had a great time.”2021 cross-country World Cup winner Loana Lecomte, who signed up for the Roc Tandem as a fun experience, made a fantastic debut, claiming the mixed category together with her pilot Rémy Duquesne (sixth overall, behind Valentin Revaux and Rémy Bourdon, who took their third win in a row). “It was a real change  because, apart from two minutes on the car park this morning, I’d never hopped onto a tandem bike before”, she grins. “It’s scary! You need to keep your eyes peeled. I almost cried on the descent from Le Fournel! We dropped our chain and, when we put it back in place, the pedals were out of sync, so it sometimes got a bit too close for comfort on the descents. It was a great experience, I think we’ll come back for more!” Finally, 18-year-old Adrien Boichis, the newly crowned world champion, won the Junior race. “I haven’t missed a single edition since my U11 years”, he points out. “It was my first time on the 42 km circuit and I really enjoyed discovering new tracks. I’d already taken the U11 and O15 races before. From next year, winning the elite race will be my goal every year!”The Roc d’Azur, the climax of these five days in the Var department, comes on Sunday. 2020 world champion Jordan Sarrou, fifth in the 2021 World Cup, will be a marked man. The Frenchman, a three-time winner of the event (2014, 2016 and 2019), will stand alone at the top of the record board if he prevails. “My shape at this point in the season is nothing to write home about, but winning here is always special”, he concedes. “I’m motivated to do well and fired up to go for a fourth win.”A regular sight in the Roc d’Azur, pole vaulter Renaud Lavillenie, who has entered a race every day since Thursday, will be tackling the elite Roc d’Azur for the first time. The women’s race could be a rematch of last Friday’s Canyon Roc Marathon, with Lithuanian Kataržina Sosna, Italian Costanza Fasolis and, of course, the reigning champion, Margot Moschetti from France, again in contention. The Roc d’Azur will also be the last of the five stages that make up the Roc Trophy. Just a few minutes separate Pierre Henri Jung, Nicolas Levasseur and Belgian Robin Vervloessen in the men’s competition, whereas German Regina Marunde, the winner of three of the four previous races, holds a comfortable lead in the women’s one.Sunday programme• 8 am: O15 Roc (17.7 km) • 8:05 am: O15 and Junior Women’s Roc (17.7 km) • 8:30 am: Roc d’Azur and Women’s Roc d’Azur (49.8 km) – Roc Trophy #5 • 10 am: Kid Roc Draisienne (150 m) • 11 am: Kid Roc Five (150 m)Find out more: www.rocazur.com