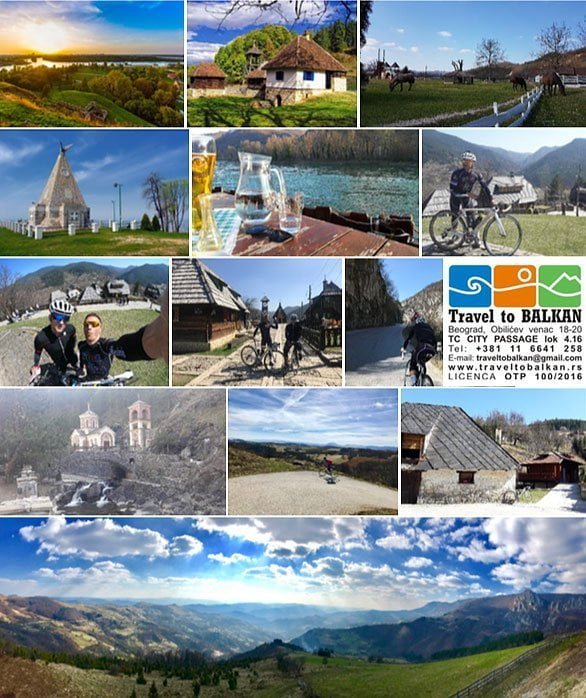 Arrival in Belgrade. Transfer to the hotel. Depending on the flight time, a walk and a sightseeing of Belgrade: park Kalemegdan, Knez Mihailova Street, Republic Square, and National Assembly … Dinner. Overnight.

localities Tršić (serbian) – Banja Koviljača (serbian), SPA Koviljača (english) | 17 km (37 km advanced group, cycling up to the mountain Gučevo (serbian) LinkBreakfast. Departure from Belgrade around 9h. Transfer to Tršić. Sightseeing of ethno complex Tršić with local guide. Nowadays, Tršič is a resort with preserved original beauty, known as the birthplace of Vuk Stefanović Karadžić, reformer of the Serbian language, educator and the great writer of Serbian literature and culture. In the complex, there is an ethnographic park with a memorial house and several buildings of national architecture (35 buildings of national construction, that are under the protection of the state: dairies, watermills, church and auxiliary facilities in the household (national construction): vajati, kačare, čardaci, ambari and magazas (Serbian), connected by paths). The entire ethno park is located in the picturesque valley of the river Žeravija (Serbian). The central place of this particular ethnographic memorial park is the house of Vuk, reconstructed house of a family cooperative with a garden, as was usual in the XIX century.Coffee break and refreshment in one of the restaurants, checking and adjusting the equipment. 13h starting a ride on a local road via city Loznica (Serbian) to Banja Koviljača – one of the most beautiful and most healing SPA in the Balkans. It’s located in western Serbia, in the embrace of the river Drina (Serbian) and the wooded mountain Gučevo, at an altitude of 128 m. It’s rich in sources of sulfur water, medicinal mud, favorable climatic conditions, as well as numerous cultural and historical monuments.Pause in the park of SPA Koviljača. Continuation to the ethno complex Sunčana reka (Serbian) – Sunny River (English), on the Drina coast. 14: 30h (16h advanced group). Arrival to the ethno complex Sunčana reka. The ethno village of Sunčana Reka is located on the bank of the river Drina, under the mountain Gučevo. It represents a unique oasis for rest, relaxation, sport and recreation. Gučevo is a wooded mountain that covers Banja Koviljača from the south side. The highest peak of Gučevo is called Crni vrh (Serbian), Black peak (English), and its altitude is 779 m. There was the first trench battle in the world’s history of war. Gučevo is rich in sources of cold, clean, drinking water.

At the top of Gučevo, is constructed the memorial to soldiers from the period of the World War I, in 1914, fallen in the battle on this mountain. The glade around the memorial is a remarkable viewpoint. The trim tracks of the mountain Gučevo, with lots of shade, make it a special event for walkers and recreationists.Lunch and free activities. Horse riding, driving quads, tennis, volleyball, archery…. After a break, dinner in the restaurant of complex (music, tamburitza). Overnight.

Bajina Bašta (Serbian) | 69km (92 km advanced group, locality Soko Grad, detur) GPX LinkBreakfast. Departure around 10h. Driving on new asphalt road along the river Drina. The river Drina is one of the longest and the richest rivers of the Balkans in terms of the amount of water, with large meanders between regions Mačva and Semberija (Serbian). The special treasure of the Drina is its living world. Passage through locality Zvornik (Serbian) and Lake of Zvornik. The lake of Zvornik is located on the border between Serbia and Bosnia and Herzegovina, the lake is an accumulation part of the river Drina. Near Zvornik is located a 45-meter high dam, that has caused the accumulation of this huge water mass and has given us one of the most beautiful lakes, that extends over an area of about 8km2. At the widest point from one to the other lakeshore, the lake has more than 3 km, while the deepest depth is 39 meters, and experienced divers claim that at these depths there are huge catfishes, weighing up to 100 kilograms. 20 km of picturesque coast offers countless possibilities: from swimming and fishing, to kayaking competitions. The lake of Zvornik is unique in Europe, because it contains fishes living in cold and fast water, and the species whose habitat is warm and calm water.

38 km, break, household Drinski raj (Serbian), Drina Paradise (English). On the coast of the Drina, a short break for lunch and refreshment. Continuation of cycling along the Drina. 69 Km around 15:00 Arrival in Vrhpolje (Serbian), ethno village, in the afternoon. Advanced group, possibility of detour to the locality Soko Grad (Serbian) + 25 km.Traditional lunch on the terrace of the ethno complex, accompanied by stories of our host about the history and the sights of the region Podrinje (Serbian). After lunch transfer by vehicles, optional to the Monastery Soko Grad, after to the unique villa Drina, on the river Drina. Dinner on turquoise Drina coast, above the shortest river of the Balkans, restaurant Vrelo (Serbian). Overnight.

Mećavnik (serbian) 53km (possibility for advanced group, detour to localities Sjemeč (serbian) or Bele vode (serbian), White Waters (english) , Mokra Gora (serbian)+ 15km) LinkBreakfast. It’s possible to organize the optional rafting along the Drina, one hour and 30 minutes-two hours in the afternoon (after breakfast). Passing by the little house on the Drina. Transfer via Tara to Mokra Gora and Mećavnik. In the far west of Serbia, where the river Drina makes the biggest meandre in its course, is located Tara, the most beautiful Serbian mountain, and at the same time one of the most beautiful mountains of Europe. There are few places with so much greenery, peace and quiet. Within the Natural reserve of nature and the area of specials characteristics – Mokra Gora, near “Šarganska osmica” (Serbian) – “Šargan Eight” (english) – unique train with a narrow track, on the mountain Šargan, there is the little hill Mećavnik, it looks like from a fairy tale. In this unique place, the famous artist and film director Emir Kusturica has built a special ethno-complex “Drvengrad”. Reviving the old houses, transferred from the surrounding towns, the architect and creator of the idea of a perfect life outside of everyday life, Emir Kusturica, has made the city. Mećavnik is a space that looks like has been built during hundreds of years, and that every house has been chosing its ideal position for years, by a firm hand of an old neymar. The streets of Mećavnik are exciting to walk at any periode of the year, because every periode offers a different pleasure and a different look at the previous memory. Streets are named after great artists, sportsmen and all those who have left or leave a trace in the history of mankind with their idea. Short refreshment on the restaurant terrace and departure on a bike ride. Around 13 hours, ride to cities Andrić grad (Serbian), Andrić city (English) and Višegrad (Serbian). Break and lunch in Andrić grad, a visit to the complex and the old bridge, the famous “Ćuprija na Drini” (serbian). Advanced group, after the break, drive back to Mokra Gora, Mećavnik. Relaxation in the hotel’s SPA. Dinner and overnight, ethno complex Mećavnik.

Around 17h (18h) end of the ride. Relaxation in the hotel’s SPA. Dinner in one of the famous restaurants of Zlatibor (tamburitza) … Overnight.

44 km (61 km advanced group)Breakfast. Zlatibor is a region of high mountains, pine forests and mountain pastures that thanks to its beautiful nature, diverse offer of accommodation and a favorable climate, has been declared the largest winter mountain tourism center of Serbia.

Zlatibor is rich in speleological characteristics / 98 caves and 44 sinkholes /, with numerous waterfalls and water sources. Among the most famous caves of Zlatibor are Stopića pećina (Serbian) – The cave of Stopić (English) and Potpećka pećina (Serbian) – The cave of Potpeć (English), and the waterfall in the village of Gostilje (Serbian) is one of the most beautiful and highest in Serbia. Surrounding lovely villages of Zlatibor are ideal for a good holiday and a visit to some of the local manifestations and very interesting festivals.

Arrival in Belgrade, Zemun (Serbian) – part of Belgrade until 15h. Lunch, after visit to the tower Gardoš (Serbian). Bike tour from Zemun quay, along the river mouth, Brankov most (Serbian) – Bridge of Branko (English), the river Sava, through residential complex Beograd na vodi (serbian) – Belgade waterfront (english), to the lake Ada (serbian) – one circle around Ada. (For advanced group driving to the top of the mountain Avala (Serbian) and ending on Ada) Transfer to the accommodation. Evening sightseeing of the city – bohemian quarter Skadarlija (Serbian). Dinner. Back to the hotel. Overnight

Breakfast. Check out from the hotel and free time. Transfer to the airport.