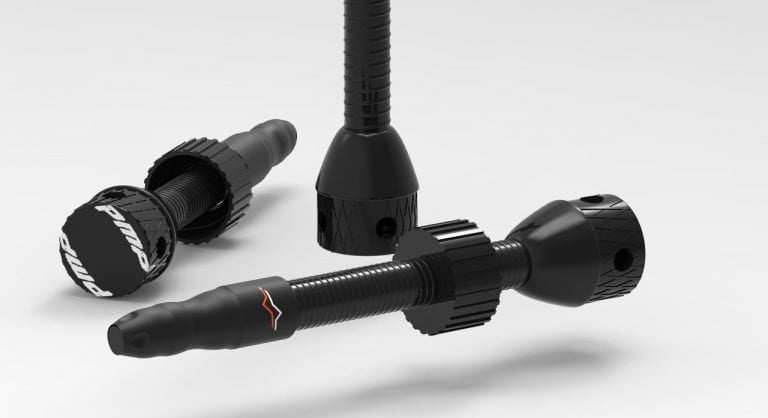 Since our VT+ has proved to be such a successful product, we have been investing in research. This has led to the creation of a new tubeless valve.

Out of all the wheel parts, valves are often sidelined and that’s a fact. However, one of our main goals was to reaffirm the importance of such an underestimated component while creating product innovation in the market and that’s what the creation of the VT+ valves led us to. It was due to their success that we were able to invest in research, time and resources, thus coming up with an even lighter type of valve in some ways recalling the VT+.

Due to their lower weight, the Pmp VT-R can be satisfactorily used also for road and triathlon bikes, where every gram makes a difference. The main innovation is that these valves feature an interchangeable head which channels the air flow, depending on whether you’re going to use them for a traditional tubeless system or a cut-resistant insert placed inside the tyre—which basically means no more clogging or inflating issues.

The increased air flow makes the tyre fitting incredibly easy, whereas the one-piece, CNC machined structure comes in different lengths depending on your rim profile.We poured all our passion into this new project and are confident that the silent—yet major— innovation brought to the sector by the Pmp VT-R valves will significantly improve the cycling experience of many bikers.—highly performing and even lighter than its predecessor. We are proud to present the Pmp VT-R valve, of which an adapted version is now also available for tyre inserts.

Last but not least: VT-Adapter

If you own a Presta valve and want to benefit from the tubeless system advantages without purchasing the VT-R as yet, we suggest you get our latest invention—the VT-Adapter. This too will ensure a 280% higher air flow into the tyre.

Both the VT-R valves and the VT-Adapter will be available from November 2019. More info about pre-orders coming soon.