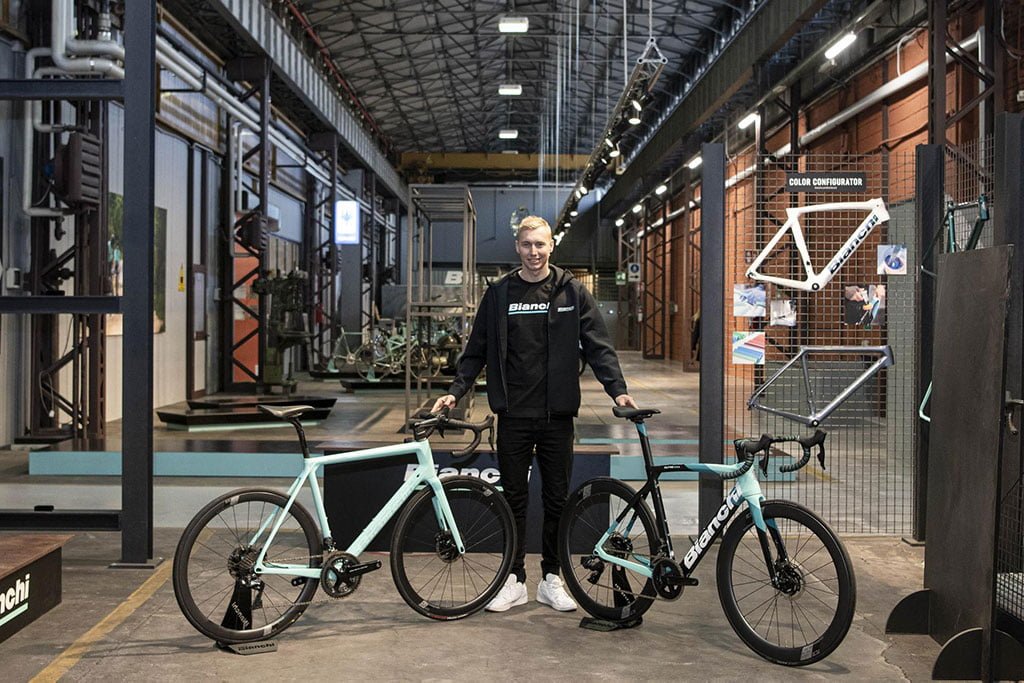 Thanks to a partnership between Bianchi and the German triathlete, Jonas Schomburg, high-performance models Specialissima, Oltre XR4 and Aquila will also be key competitors in the most important international triathlon events Bianchi is proud to announce a three-year partnership with Jonas Schomburg, the German triathlete born in 1994, whose specialty is Olympic distance triathlon. He made his Olympic debut at the 2020 Olympic Games in Tokyo. The focus of this partnership is the 2024 Olympic Games in Paris, where Jonas, who is an excellent cyclist, will take aim at ambitious goals, thanks to the technical support of Reparto Corse Bianchi.

“I’m honoured to become part of the Bianchi family. I’m very motivated to represent such an iconic brand with strong technological know-how and, at the same time, I sense the responsibility. Marco Pantani and Lothar Leder were the athletes that inspired me when I was young. The bike portion of triathlon is my strong point out of the three disciplines. I’m looking forward to proudly carrying the Bianchi spirit around the world on my way to the 2024 Paris Olympics,” said Jonas Schomburg. Thanks to this agreement with the German triathlete, Bianchi confirms its racing DNA in Olympic triathlon as well. Top-of-the-line models Specialissima, Oltre XR4 and Aquila will help him make the difference in this racing distance. With its all-rounder qualities, Specialissima is known for its light weight, while offering ideal stiffness for transferring power to the road, especially on climbs. Not to be outdone, the Oltre XR4 is the aero model par excellence – perfect on fast segments, such as the 40-km bike stint in the Olympic race. Finally, Aquila is Bianchi’s time trial model with tube shapes specifically designed for maximum aerodynamics, thus ensuring an excellent bike setup for the Olympic triathlon.

“Equipment choice is very important in triathlon. A high-performance bike is essential in order to stand out from your rivals. Thanks to Bianchi, I can choose between three models with different characteristics, each of them specially designed for different race situations. I will decide which one to use based on the race route. It is an honour to have a partner like Bianchi on the road to the 2024 Paris Olympic Games. Qualifying will require constant work throughout the next two years, during which I’ll also be focusing on the WTCS-Series, the European Championships and the Super League,” explained Jonas Schomburg. The German triathlete’s season debut is scheduled for March 11 at the Clash Endurance event in Miami.   “We are thrilled to announce this partnership with Jonas Schomburg because it allows us to bring Reparto Corse’s experience to elite triathlon. We will support Jonas in his preparation for the 2024 Paris Olympic Games, in his pursuit of victories with a goal to score a spot on the starting line of the Olympic race. Moreover, this agreement is important to strengthen our presence in the German market, where we want to become even more of a key player,” said Bianchi’s CEO, Fabrizio Scalzotto. Treviglio (Italy), February 8th, 2022 Sorgente: Bianchi Press Office +39 04611863053 | bianchi_press@vitesseonline.it | www.vitesseonline.it